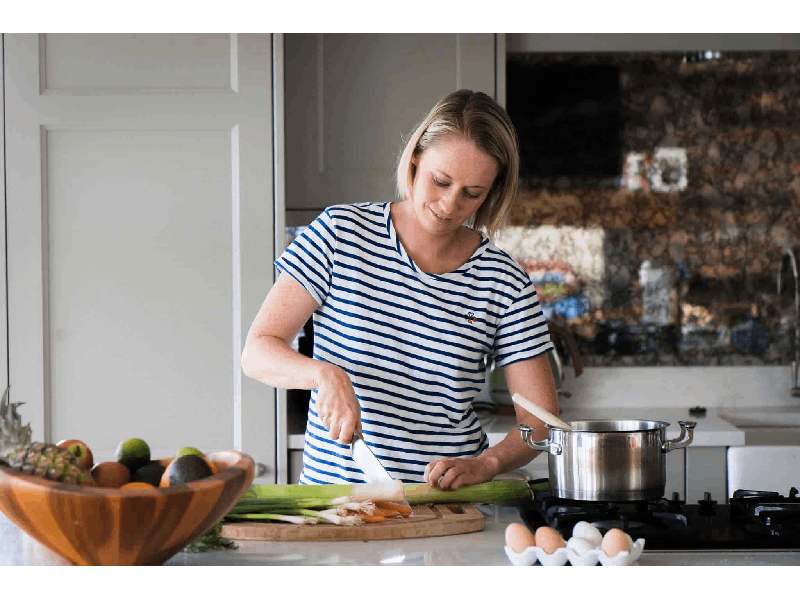 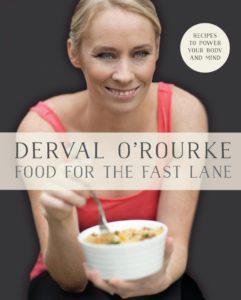 Food for the Fast Lane: Written by me. Bursting with Simple, Healthy, Delicious Recipes. A healthy lifestyle starts with what you put into your body “goodness in = greatness out” This book is a part of our Rise & Shine collection.

This recipe book is a No.1 Best Selling cookbook. It has recipes to power your body and mind.
The recipes in my book are full of goodness, taste great and are effortless to prepare. My approach is that food should be tasty and nutritious! Want to enjoy delicious food that fuels your body, gives you energy and powers your performance? This is the book for you!

In this recipe book, I reveal the recipes that helped me reach my professional goals. Everything is intertwined. Cooking and eating well are vital for a happy, healthy life, and what you put into your body determines how you live and feel. So get ready to discover my theory for yourself: goodness in = greatness out.

Four weeks before the Olympic Games in Athens in 2004 I travelled to a race in Thessaloniki in Greece. I felt really sick during the journey but assumed that it wasn’t anything serious. I checked into the hotel before midnight and tried to settle in and sleep for the night. I felt worse as the night wore on and it got to the stage where I was unable to walk or stand because my stomach cramps were so severe. At around six in the morning, I was rushed to the hospital. I was diagnosed with severe food poisoning and appendicitis. If the doctors removed my appendix, it meant I would not have had the opportunity to race at the Olympic Games.

The doctors treated me with antibiotics and kept me in hospital for six days. I was released and sent back to Ireland. I was 6kg lighter and in very bad health. The medical advice was to skip the Olympics and recover. But I wasn’t willing to do that. The Olympics come once every four years. No athlete knows for sure if they will ever make an Olympics. And even when they do make one Olympics, they can never be sure what the next four years will bring and whether they will be good enough to even make the team.

I decided to go to Athens in 2004. I lined up to race. I was 22 and one of the youngest members of the Irish Olympic team. It was one of the worst performances of my entire career and possibly had the biggest impact on my future running.

I trailed home in seventh place and I left the track feeling absolutely devastated. After the race, I hung around outside the stadium on my own. I could see the Olympic flame in the distance. I sat down and had a long think about things. I decided that if I was going to be an athlete, then I didn’t want to be a bad one. Making a team would never be enough for me. I wanted to excel and to try to be one of the best in the world.

I kept thinking about my recent illness and my stay in hospital. I knew that being in hospital four weeks before the games had wiped any chance of me competing well. The message was loud and clear: I wasn’t paying enough attention to my general health. I was depending solely on the work I was doing on the track and in the gym. And that was not enough.

Sitting outside the Olympic Stadium in Greece was a wake-up call for me. From that point on, I changed as an athlete. I started to think about how everything in my life had a connection to my health and fitness. Everything is intertwined. If I wanted to achieve my ultimate performance goals, then I needed to make sure that I was paying attention to lots of things in my life. I needed to sleep better. I needed to eat better. I needed to live better. My college days were coming to an end. I was at a crossroads. I didn’t want to waste my time coming up with excuses for why I was not the best I could be at my sport.

I stepped on the plane back to Ireland with fire in my belly and a plan of action. I spent the next five weeks reading every resource I could get my hands on. I read all about successful sportspeople from every field. The message was the same from every one of them. They didn’t do just one thing and they didn’t do it alone. Each one of them had a team. They didn’t just take advice from a coach: they listened to nutritionists, physiotherapists, psychologists, agents, and trusted friends. Okay, so I was only a small fish in Irish athletics. I wasn’t even a blip on the radar in international competition. But I knew I could find a way to be as good as I could be and see where that would take me.

I started looking for the best people to help me with different areas of my life. I had no financing to do this, so I worked a telesales job for five hours every day and I spent the rest of every day organising myself, making plans, and learning at every opportunity. It was Team Derval: Operation World Domination.

One of the most important people I encountered was a nutritionist by the name of Andrea Cullen. She forever changed my views on health and my approach to food. Andrea is someone that I have huge respect for and admiration for. After just one hour in Andrea’s company, I changed the way I thought about food. The best thing about working with Andrea was that I didn’t end up with an obsessive list of forbidden foods. I developed a love of eating healthier foods. Along with receiving expert nutrition advice from Andrea, I was fortunate enough to start working with the husband-and-wife coaching team, Sean and Terrie Cahill. They left no stone unturned and their approach to performance included every aspect. They turned my world domination plan into medals.

Winter 2004 marked the start of my journey towards being a healthier person. There were some big changes for me. I had slipped into the college way of life of eating processed, cheap canteen food. That habit had to be replaced. I started cooking more and more. I changed how I snacked on foods and I made an effort to proritise rest and to sleep in a much more regular pattern. I looked at all the aspects of my overall health and saw how they related to my performance. In simple terms: I decided that the healthier I was, the faster I would run.

In March 2006 I stood on the line for the World Indoor Championships and it took me 7.84 seconds to become World Champion. I finally became the athlete I wanted to be.

My journey started with eating healthy and tasty food. This grew into a passion for cooking my own healthy and tasty food. I began experimenting more and more in the kitchen. I competed in my thrust Olympics in London 2012 and, after the huge build-up and all the pressures that come with an event of that magnitude, I needed a break. I decided to sign up for cookery school and it was one of the best decisions I have ever made. I learned loads and I even ran my fastest time in seven years a couple of months after cookery school!

You don’t have to be an elite athlete to care about what goes into your body. Each one of us can spend a bit of time and effort on the health of our bodies and minds. Even if you don’t know where to start, just start somewhere. Your health is a priceless asset.

My main fitness tip is just to get up and get out. Getting started is the hardest part of being fit – but if you put your runners on and leave the house, you will always get something done and you will always feel better afterward. My main health tip is to be aware of what you are eating. Start reading the labels on the food you are buying – it will open your eyes.

If I’ve learned one thing in recent years, it’s that running fast isn’t just about turning up and doing the work in the gym and on the track. It’s about what you do with the other twenty hours of the day. My approach to food? It should be tasty and nutritious. My philosophy? Sleep well, eat well, and live well.

This website uses cookies to improve your experience. We'll assume you're ok with this, but you can opt-out if you wish. Read More

Yes Please Decline Cookie Settings
I consent to the use of following cookies:
Cookie Declaration About Cookies
Necessary (3) Marketing (3) Analytics (3) Preferences (0) Unclassified (4)
Necessary cookies help make a website usable by enabling basic functions like page navigation and access to secure areas of the website. The website cannot function properly without these cookies.
Marketing cookies are used to track visitors across websites. The intention is to display ads that are relevant and engaging for the individual user and thereby more valuable for publishers and third party advertisers.
Analytics cookies help website owners to understand how visitors interact with websites by collecting and reporting information anonymously.
Preference cookies enable a website to remember information that changes the way the website behaves or looks, like your preferred language or the region that you are in.
We do not use cookies of this type.
Unclassified cookies are cookies that we are in the process of classifying, together with the providers of individual cookies.
Cookies are small text files that can be used by websites to make a user's experience more efficient. The law states that we can store cookies on your device if they are strictly necessary for the operation of this site. For all other types of cookies we need your permission. This site uses different types of cookies. Some cookies are placed by third party services that appear on our pages.
Cookie Settings
WordPress Image Lightbox